The Magellan or Magellanic Penguin in Peninsula Valdes 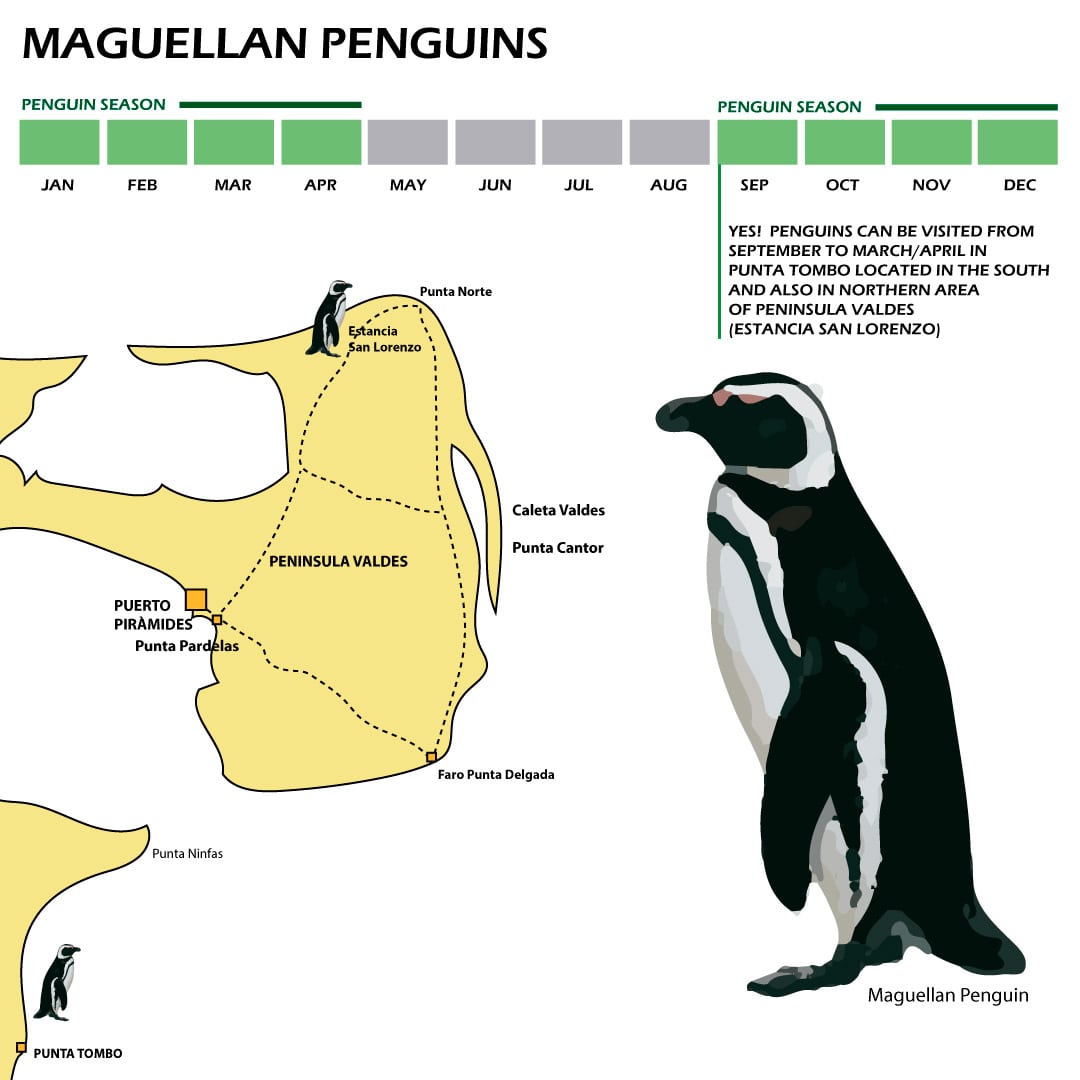 THE MAGELLAN PENGUIN: When and Where to see them?

The Magellanic penguin is a South American penguin, breeding in coastal Patagonia, including Argentina, Chile and the Islas Malvinas, with some migrations to Brazil, where they are occasionally seen. It is the most numerous of the Spheniscus penguins. Its nearest relatives are the African penguin, the Humboldt penguin, and the Galápagos penguins. The Magellanic penguin was named after Portuguese explorer Ferdinand Magellan, who spotted the birds in 1520 during the expedition to Patagonia.

Magellan penguins are medium-sized which grow to be 61–76 cm (24–30 in) tall and weigh between 2.7 and 6.5 kg (6.0 and 14.3 lb). The males are larger than the females, and the weight of both drops while the parents nurture their young. Adults have black backs and white fronts. There are two black bands between the head and the breast, with the lower band shaped in an inverted horseshoe. The head is black with a broad white border that runs from behind the eye, around the black ear-coverts and chin, and joins at the throat. Chicks and younger penguins have grey-blue backs, with a more faded grey-blue colour on their chest. Magellanic penguins can live up to 25 years in the wild, but as much as 30 years in captivity. Young birds usually have a blotched pattern on their feet, which fades as they grow up into adulthood. By the time these birds reach about ten years of age, their feet usually become all black.

Magellan penguins feed in the water, hunting cuttlefish, squid, krill, and other crustaceans, and ingest sea water with their prey. Their salt-excreting gland rids the salt from their bodies. Adult penguins can regularly dive to depths of between 20m to 50m deep in order to forage for prey. During the breeding season males and females have similar foraging and diving patterns as well as diet composition, however bone tissue analysis suggests that diets diverge post-season when limitations imposed by chick rearing are removed. 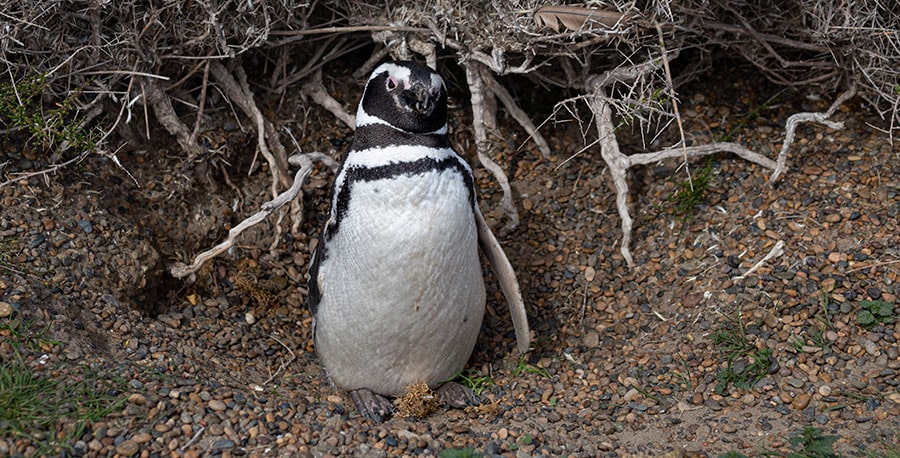 Magellanic penguins travel in large flocks when hunting for food. In the breeding season, these birds gather in large nesting colonies at the coasts of Argentina, southern Chile, and the Islas Malvinas. The breeding season begins with the arrival of adult Magellanic penguins at the breeding colonies in September and extends into late February and March when the chicks are mature enough to leave the colonies. One of the largest of these colonies is located at Punta Tombo and the other one is located in San Lorenzo, in the north shore of Peninsula Valdes. Nests are built under bushes or in burrows. Two eggs are laid. Incubation lasts 39–42 days, a task which the parents share in 10- to 15-day shifts. The chicks are cared for by both parents for 29 days and are fed every two to three days. Normally, both are raised through adulthood, though occasionally only one chick is raised. A successful Magellanic is considered to be able to raise 0.7 chicks on average per breeding season. Magellanic penguins lay eggs in warm places where the temperature remains over 20℃.