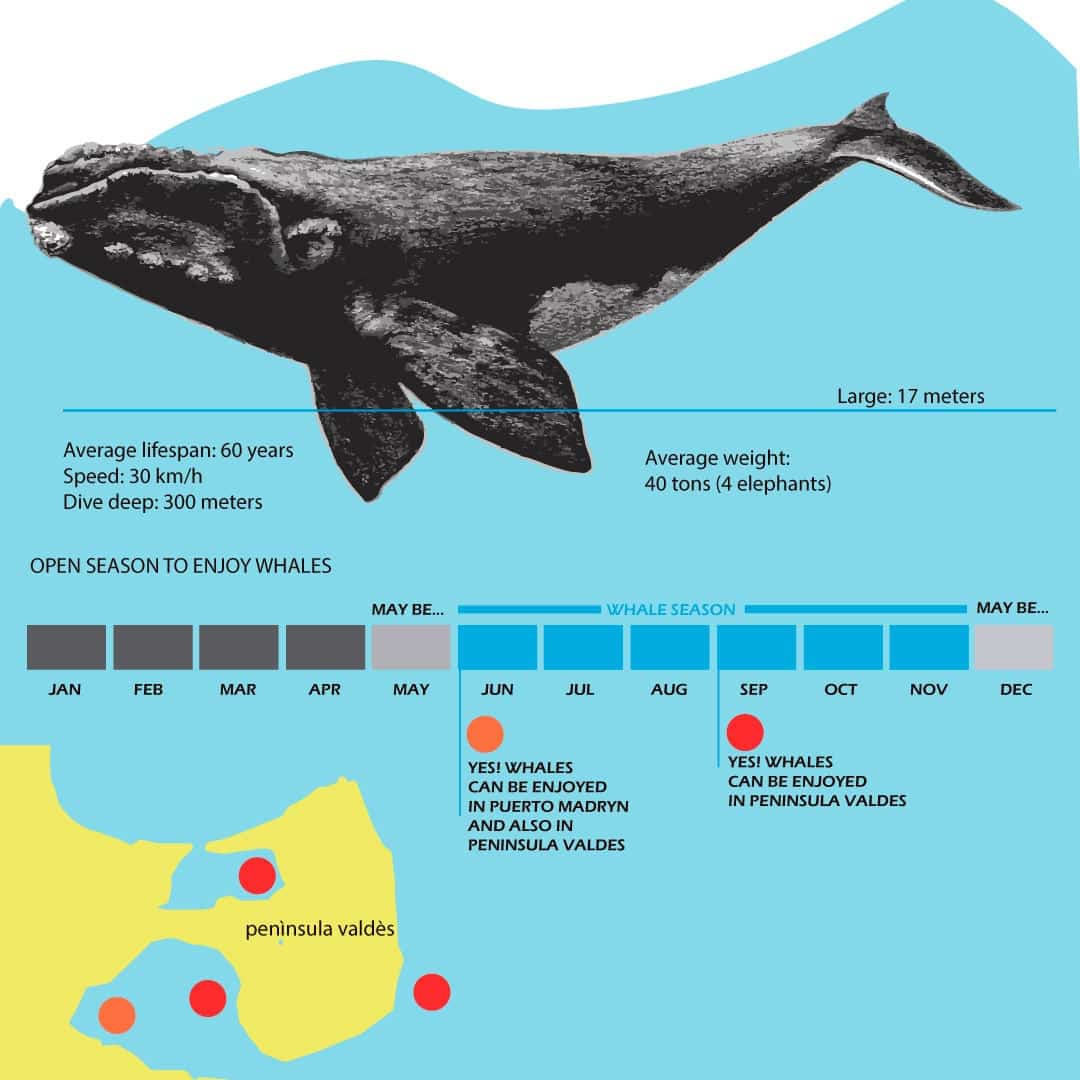 WHALES: When to see these incredible animals in Peninsula Valdes

Whales are may be, the highlight attraction in the area of Peninsula Valdes and Puerto Madryn. Of course, these incredible animals arrives to the area in some specific months. Take a look to the season to enjoy whales. First specimen arrives in June, and mother and carf can be seen in the area of Doradillo, very close from the coast. It´s an amazing show of nature. During June and July, and some time in August, they are in this area, and also in Peninsula Valdes, but from September to middle december, best place to enjoy whales is Peninsula Valdes. These collosus can be seen in Puerto Pirámide for example, a small village in the Peninsula when you can overnight.

Let us talk about the whale, our whale in the area. The Southern Right Whales are a member of the baleen whale family. Many baleen whales will take in large amounts of water then strain it back out through specialized plates in their mouths known as “baleens.” The krill are trapped inside by the baleen and then are swallowed. However Southern Right Whales are different in that they are skimmers – they swim through clouds of krill with their mouths open, removing the krill from the water as they pass.

These are social animals, whales are quite curious and playful when it comes to being around humans. They have been known to try to give boaters and kayak rides on their backs. They’re also known to happily interact with Dolphins and other whales. They move slowly, and swimm around 5 -6 km per hour… It`s an average speed.

Southern Right Whale females become sexually mature around the age of 9 years old. They will give birth every 3 to 4 years. The breeding season lasts from the middle of July through August when they come to the area of Puerto Madryn and Peninsula Valdes. First months, the show in the Doradillo area is awesome! The female will become surrounded by many males. She will roll onto her back to keep her genitals up out of the water and out of the reach of the males until she is ready. This is not always so successful since the male’s penis is 12 feet long and maneuverable.

The males, while not outright fighting, will push and shove each other around to gain access to the female. When she is ready the female will give multiple males access. The males produce a gallon of sperm . The pregnancy can last for over a full year. The calf weighs 1,500kg at birth.